The corner of historic Wick Park is no longer being put to good use. It is run down and somewhat abandoned, save for a few occasional beer drinks. The goal of the project is to restore the corner of the park to and inviting area that is able to function well and serve the community, re-creating a sense of security and re-establishing a sens of community in Youngstown. 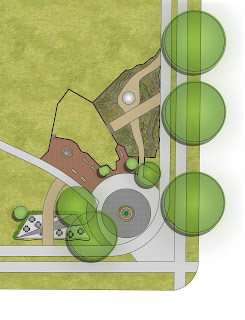 Site Plan
The design is broken down into three phases. The first phase, which is currently being implemented, involves restoring the 6x6 timbers that provide the terraced form of the existing park. A second Phase will involve the implementation of a community garden on the site of a former playground in the park. The third phase includes plans to construct a small, community sitting area adjacent to the sidewalk which aims to give users a private space to relax that is separate from the park's core - allowing the fountain area to once again become open and inviting for visitors.

The Community Garden incorporates a mixture of planted fruits and vegetables in an attempt to encourage community interaction and engagement within the site, The garden includes a rainwater collection tank in order to allow for easy watering and maintenance of plantings. The garden is set back from the sidewalk and physically separated by an undulating aluminum fence in order to prevent theft by passersby. Small holes will be cut into the fence in order to allow for small views into the space and revitalize the streetscape. String lighting will be hung iver the garden, illuminating it at night and preventing possible theft.

The seating garden includes movable seating and creates a space within the park that is secluded and private allowing for multiple uses - such as the beer drinkers who currently occupy the fountain plaza. The enclosed space will feature overhead string lighting in order to create a more inviting, illuminated space at night.
By creating a separate area for these types of uses, the more visible parts of the park - such as the community garden and fountain plaza - will become much more open and inviting.